Last week, I returned from New York where I attended my first RWA (US) conference, and it was amazing!

I was very lucky to have been awarded the regional arts grant from Sunshine Coast Council, which helped fund my registration and travel. So after a few days sightseeing and catching up with fellow author Diane Michaels, I checked into the Marriott Marquis in Times Square and embarked on a four-day whirlwind of workshops, networking and general immersion in the romance industry.

Day 1 included a great session by Lisa Cron, author of Story Genius, who talked about the anatomy of a scene and how it relates to her definition of ‘story’. This was followed by a first timers’ orientation, featuring several seasoned attendees advising us newbies on how to get the most out of the conference (recurring themes included pacing yourself and taking the time to get to know the other authors).

After that, there was just enough time for me to shower and change before I met up with seven authors in my chick-lit Facebook group. It was so fun getting to talk to them in real life after several years of online communication—and it was a testament to their skill that their personalities were exactly as I imagined them to be. 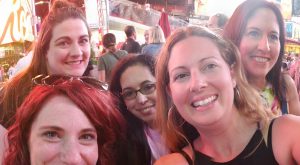 I barely made it to the first session on Day 2, because I’d been up until late, and even after going back to my hotel room, I was too wound up to sleep right away. But I’m glad I attended the Better, Faster Stronger First Drafts workshop, which gave me a refresher on tips to plan out a story more efficiently.

After that was an inspirational keynote speech from Jennifer Probst, who is a USA Today and New York Times bestselling author. And then it was straight onto the Golden Heart Awards lunch, where the theme was diversity and inclusion.

My next session was probably the only one I didn’t completely love, which was from some representatives at Amazon who marketed their workshop as how to reach your audience. I had assumed it was aimed at how best to use their advertising function and categories, but it was really just a basic introduction to Kindle, Print and Audible. But I did get to speak to a rep afterwards, who was very helpful handling a few requests I had regarding Amazon in Australia.

At that point, I realised I hadn’t been outside the hotel since the previous evening, so I took the afternoon off to get outside, where I went to the Rockefeller Centre and bought some souvenirs for my boys. 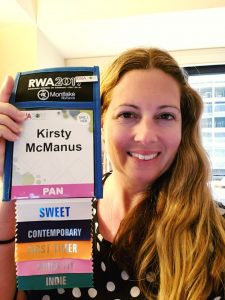 I wasn’t ready to go to call it a day, though, so I met up with fellow Aussie Sharon Johnston (who was easy to spot in a crowd thanks to her pink hair) and we did a little networking with some editors and authors in the hotel bar.

Another late night meant I only just made it to the next day’s buffet breakfast, where more awards were presented. Again, it was great to listen to such awesome speeches on inclusion. Jennifer L. Armentrout then took to the stage to discuss her career, and the condition that means she will one day lose her sight. She was very inspiring.

It was right back into learning at 9.45am, with a workshop on eleven productivity myths, and then a second session on maximising Facebook ads, with the lovely Kristan Higgins and Vanessa Riley.

Knowing I had a big night ahead, I took a couple of hours to get outside again, this time with fellow author Tracy Brenton. We walked all the way through Central Park and did a tour of the Guggenheim, leaving just enough time to get back, shower and recoup before attending the RITAs. 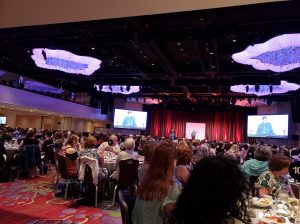 This was a huuuge event, akin to the Oscars. It was amazing to see such a great celebration of romance writing and witness some very worthy winners up on stage.

The after party was even more epic, with hundreds (if not thousands) of women (plus a handful of men) dancing the next few hours away. This was one of the memories that will stick in my mind the longest.

I again just made it to the next morning’s session on exploring character friction in romance, although I was feeling a little nauseous from the late night and too much midnight cheesecake, so I took a few minutes to rest in my room before heading to my second-last session, which was a very fun round-table discussion with Xio Axelrod on writing fast, and not getting caught up in editing too early.

The final workshop I attended was on group projects and how best to organise them for maximum impact. I found this very helpful, considering I am currently in a group project of my own, and have been looking for ways to ensure its success in the final weeks.

The conference ended around midday, so I spent a few hours enjoying not having anything to do, but then I snuck out to see Wicked on Broadway with Tracy that night. Despite being exhausted, it totally made the trip.

A bit of sightseeing on Sunday before heading to the airport capped off an amazing week. I definitely want to do this again!

(As mentioned at the beginning of this post, Sunshine Coast Council awarded me the regional arts grant, which helped make this all possible. Thank you!)